Synopsis of the Project 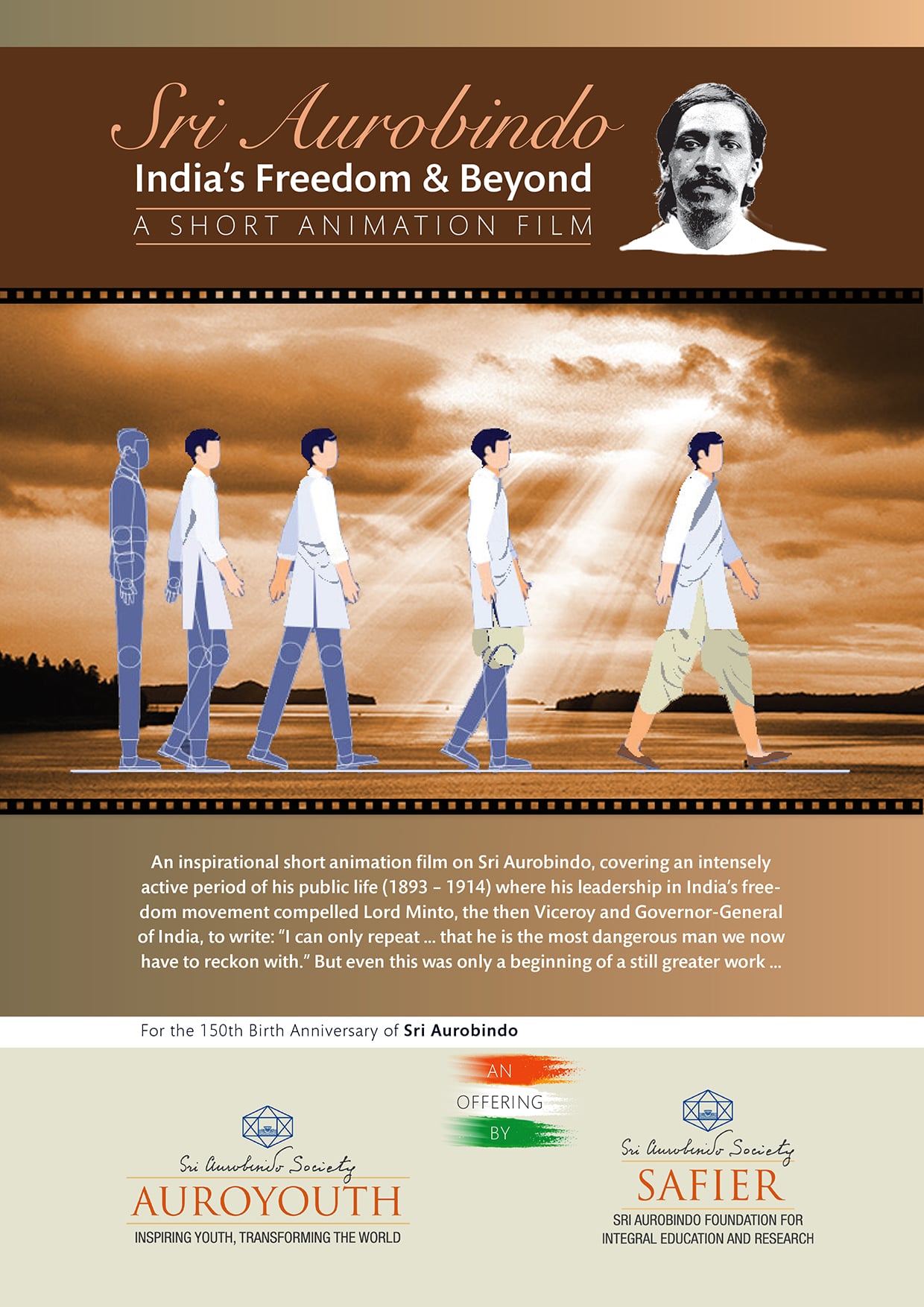 A short animation film on Sri Aurobindo, based on our research into his role in India’s freedom. It will cover the period of Sri Aurobindo’s life from when he returned to India after his education in England (1893) to the eventful meeting of the Mother with him (1914). This is the most visible part of Sri Aurobindo’s public life and most thrilling to the youth of India and the world. His further work at Pondicherry will also be suggestively included.

Full film to be ready for release on 15th August 2022, the 150th birth anniversary of Sri Aurobindo

This is an offering to Sri Aurobindo and the Mother by all of us who work for the realisation of Their vision.

Why Are We Making This Animation Film for Youth?

Sri Aurobindo – a freedom fighter, writer, poet and yogi – is a vast synthesis of Matter and Spirit, Science and Spirituality, the human and the Divine. And he affirmed that ‘Man is a transitional being’, and that we have not reached our potential yet. What we have been, is nothing compared to what we could be. And the Choice to willingly collaborate in this Future is ours and ours alone to make.

The youth of India does not know about Sri Aurobindo and his work, and especially the intense role he played in India’s freedom. The view of the British Government was clearly expressed in what Lord Minto, the then Viceroy and Governor-General of India, wrote about Sri Aurobindo: “I can only repeat … that he is the most dangerous man we now have to reckon with.”

Sri Aurobindo not only lit the fire of complete freedom for his country which was under the rule of the British Raj (during the early 20th century), but also opened the doors of the future while living a secluded life in Pondicherry. The upcoming 150th birth anniversary will be the perfect time to bring out a film keeping in mind the spirit of the youth. And in a medium and language that resonates with the young.

About The Animation Style of the Film

The medium of animation film allows for fine artistic expressions. Sri Aurobindo has written highly about the Bengal artists like Abanindranath Tagore and Nandalal Bose and the renaissance of India’s artistic genius through their work. We wish to derive the art style of the film based on their works to capture the essence of that spirit.  We want to create something of timeless artistic value that can be shown in any of the international film festivals and inspire the generations to come.

We will be commissioning this film to an animation studio in Mumbai http://studioeeksaurus.com who are well established in this field with many national and international awards. The director and lead animator of the film will be Suresh Eriyath who is the founder of the studio with 20 years of experience.

Details on the Animation Style for the Film

We want this film to be a fine work of art expressive of the spirit of India that can be shown in any of the international film festivals for not only its message but also for its artistic value. Besides, we want the film to be of timeless value. To do so, animation is a perfect medium, especially to make it as a work of art. But which artistic style and spirit shall we follow? A guiding light can be found in Sri Aurobindo’s own words.

He wrote in 1909 in Karmayogin under the title ‘The Awakening Soul of India’: “In Bengal, again, the national spirit is seeking to satisfy itself in art and, for the first time since the decline of the Moguls, a new school of national art is developing itself, the school of which Abanindranath Tagore is the founder and master.”

These two paintings, first one by Nandalal Bose and the second by Abanindranath Tagore, are some of the finest examples of the new creation in art in Bengal of that time.

Later in 1918, Sri Aurobindo wrote in his essay ‘The Renaissance in India’:

“This [renaissance of national art of India] is a true new creation, and we may expect that the artistic mind of the rest of India will follow through the gate thus opened, but we may expect it too to take on there other characteristics and find other ways of expression; ….”

This is the spirit we wish to express through the film and the art style of the animation is to be closely derived from these examples representing the timeless spirit of India in new forms.

How You Can Participate & Contribute

We have already started preparing the grounds for this Animation film by working with a team of professionals and gathering the support of like-minded people.

Our first target is to come up with a trailer, for which a seed fund of about Rs. 12-15 lakhs is needed urgently. The project itself has an estimated budget of Rs. 1.7 to 2.0 crores, in order to ensure that it is of a high quality in all its aspects. We need a lot of financial support to make this happen and this is an appeal to you to contribute to this labour of love, aspiration & effort from us.

You can contribute financially and in other ways towards this effort and help this film to take shape by Aug. 15, 2022, the 150th birth anniversary of Sri Aurobindo. Your contributions to this project are eligible for 100% tax benefit under section 35(i)(iii) of the Indian Income Tax Act.

Please use the following details for your financial contributions:

For more information, please write to: